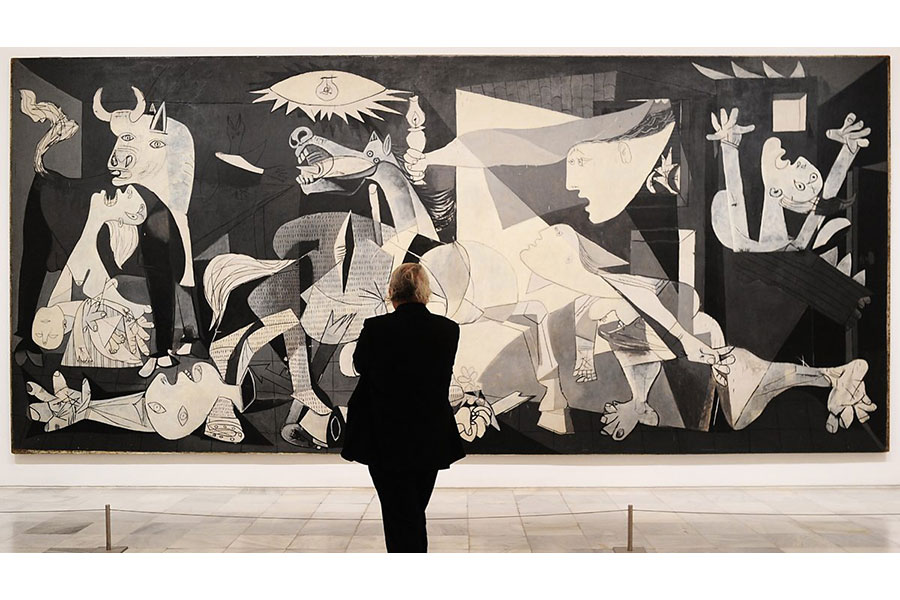 Storytelling in a Time of War

“The first casualty when war comes is truth,” is attributed to Hiram Johnson, a Republican politician from California who served in the United States Senate for nearly 30 years, beginning in the midst of World War I.

Certainly anyone watching Russian President Vladimir Putin hailing the country’s “special operation” in Ukraine at a rally in Moscow’s Luzhniki stadium yesterday is aware of the utter disconnect between the story he is telling his domestic audience and the truth.

Truths such as those told by the 55-year-old Irish news photojournalist Pierre Zakrzewski who tragically died, alongside his 24-year-old colleague, Oleksandra Kuvshinova, when their vehicle was hit by artillery shells in Horenka, on the outskirts of Kyiv.

Tyrants trying to reposition the senseless deaths of thousands as some noble tale of a nation’s future being safeguarded is nothing new.

In 1937, when General Franco arranged for Nazi Germany’s Condor Legion to bomb the Basque town of Guernica, a quiet village 10 kilometres from any front line, massacring the civilian population of mostly women and children, many could testify as to the truth of what happened.

One such account was from The Times journalist George Steer who wrote:

“Guernica, the most ancient town of the Basques and the centre of their cultural tradition, was completely destroyed yesterday afternoon by insurgent air raiders.

“The bombardment of this open town far behind the lines occupied precisely three hours and a quarter, during which a powerful fleet of aeroplanes consisting of three types of German types, Junkers and Heinkel bombers, did not cease unloading on the town bombs weighing from 1,000 lbs. downwards and, it is calculated, more than 3,000 two-pounder aluminium incendiary projectiles.

“The fighters, meanwhile, plunged low from above the centre of the town to machinegun those of the civilian population who had taken refuge in the fields.”

As soon as reports and images of the utter destruction began to emerge, Franco and his generals realised the emotions they would stir both in Spain and abroad, and claimed that the Republican inhabitants had destroyed their own town – a perverse explanation which has been echoed in recent weeks.

On reading Greer’s report, Spanish artist Pablo Picasso was inspired to paint ‘Guernica’ at his home in Paris, depicting the inferno in the small Basque town. One of his best-known works, it is regarded by many art critics as the most moving and powerful anti-war painting in history.

Picasso remained in Paris during the city’s World War II occupation by the Nazis. An oft-repeated story is that, upon seeing a photo of Guernica in Picasso’s apartment, a German officer once asked him, “Did you do that?” to which Picasso responded, “No, you did.”

Franco ruled Spain for almost 4 decades and it would be 6 years after his death when Guernica was first shown in Spain. Viewed by more than one million people in the first year alone, it is still one of the biggest draws at the Reina Sofia gallery in Madrid.

So regardless of what stories Putin tries to tell his own people over the coming days and weeks, there will eventually come a time when anyone who asks the question as to who was responsible for all this human devastation and misery, the answer will be, “you were.”